Attention musicians! During next month’s World Music Weekend (Oct. 4-6), we want you to be part of an ensemble that will perform this tune – flash mob style! – at CultureFest at the Chattanooga Market on Sunday, October 5. The tune is El Gran Norte, written by one of our featured guests, Ernesto Calderón. He and members of the Transatlantic Chilean Folk Ensemble first executed a flash mob with this tune in Valparaiso, Chile, and we’re excited for you to help us bring it to Chattanooga!

Watch and learn the tune from the Valparaiso performance here, or learn it from the sheet music below.

All events are free (donations accepted) except for the Frank Fairfield evening concert on Saturday, which will be $10.  Please call 423-779-6581 if you have any questions.  Enjoy the weekend!

He’s back!! Frank returns to Chattanooga to celebrate our first World Music Weekend, and share with us some songs and tunes from a truly multicultural America.

Doors open at 7pm, when Lon Eldridge will host a Victrola listening session, showcasing some favorite 78 recordings from a century ago!

$10 at the door. (free for teens participating in the World Music Weekend teen track)

He is Frank Fairfield. A musician. A banjo picker. A fiddle hummer. A song singer. We’ve heard him described as someone who was discovered at a farmers market out in California, as if he were some long lost treasure or mythical land. As we see it, it isn’t some deep yearning for a time long forgotten that drives Frank Fairfield, he isn’t trying to be something that no longer exists, because in fact, he DOES exist. The music he plays, creates, and performs is the music that carried all of us, from all over the world, to the place (wherever that place may be) we are now. He plays the American landscape, the one he himself sees and experiences. He goes about it with the only tools necessary, as any good craftsman would. Its not some ship filled with Spanish doubloons, or some ancient Amazon city of Gold, its Frank Fairfield. A musician. A banjo picker. A man not competing with time, only living in his own.

“Fairfield is worthy of your consideration, even if you’ve never heard or considered the old-time music. He plays with a rare integrity, offering up his life in a way that does exactly what folk music must do– it relates the world as the singer sees it, mixing sadness with sweetness, excitement with low-down and miserable depression. This has nothing to do with genre; hip-hop, jazz and rock all feel this way, too. Like the best of it all, Fairfield’s music seems inexorably real and entirely necessary.” – Grayson Currin, Pitchfork

[In this video, you’ll see two Bulgarians playing tunes they learned from a recording of an English musician.]

From Zhivko:
Ian Stephenson – a great musician, guitarist from the UK has inspired us, two Bulgarians, to play Celtic music. He was just one of so many great musicians we met at Ethno Flanders. Like almost everybody there he is an amazing musician. He is familiar with folk music not only in the UK but almost everywhere. We were so influenced by the people we met at Ethno, and the music we played there that we decided to keep playing it here in Bulgaria. We found an amazing piece recorded by Ian, “Castlerock Reels,” which by the way is super fun to play, and we decided to learn it and make a cover of it with my kaval and Viktor Dzhorgov with his guitar.

Leen and Myriam — the girls from the poster and the website! — share this extra friendly demonstration of our “tune of the weekend”. It’s the “Schottisch uit Wezembeek” or the Schottisch from Wezembeek, a town near Brussels. We’ll all play this together in Chattanooga at the very end of May!

Two Fridays ago, Micah Spence and Christie Burns visited two classes at Howard High School with a presentation all about our musical lives: how we learn music, and how we share it with others. Micah wanted to show an excerpt of this video because he’d had a memorable learning experience several years ago when Cheick Hamala Diabate stayed with his family in Atlanta. Being the youngest musician in the household, and according to Cheick’s cultural practices, Micah was expected to sit with Cheick and have a lesson. In our presentation, Micah told the Howard students about Cheick’s technique on the banjo, how they communicated in broken French, and how through this musical encounter he found out about an instrument called the ngoni, an ancestor of the banjo. In sharing these memories (and this video) with the students, Micah conveyed how even just one hour of sitting with a musician from another culture can create lasting memories, teach you things you never even thought to ask about, and squeeze the continents just a little closer together. 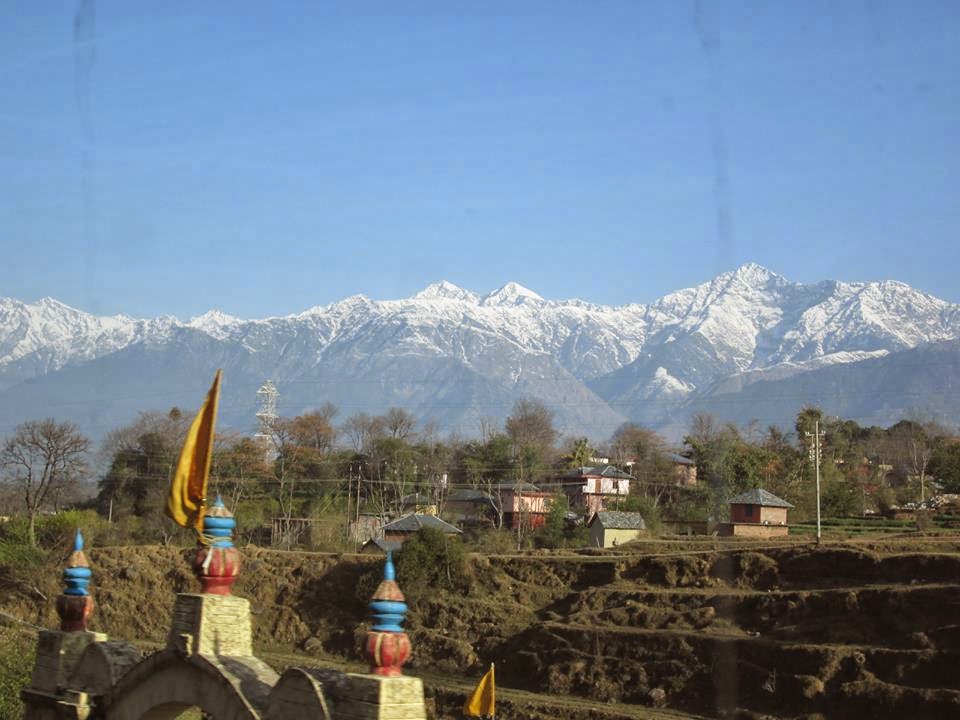 Then musicians from Bosnia, Iceland, France, Croatia, Iran, Sweden, Denmark, India, Estonia, Belgium, and Norway each would give workshop in which they taught a song from their own country. The afternoons were often spent exploring the nearby monasteries, parading through the village, or practicing and recording music. In the evening? Jams. All night jams. At least that’s how it was in the Shimla house where I was staying. Arsalan, Arman, Durgesh, Damir, Nenad, Nithin, Rahul, and myself would jam the night away in our own living room as friends would make surprise appearances throughout the night, each adding new freshness to the jam. Shimla was indeed the party house.

Oud, sarood, nyckelharpa, santoor, accordion, mandolin, guitars, bagpipes, flute, fiddles, saxes and a wide range of percussion joined with voices to produce the orchestra of Ethno India. In addition to singing, I played the clarinet. I had originally planned to bring a guitar, though at the last minute I decided I didn’t have much to say with that instrument. I informed the Ethno India team ahead of time that I am not well versed in the folk music of America, and the best I could contribute would be either the classical music they taught me in school or the rock’n soul in my bones. 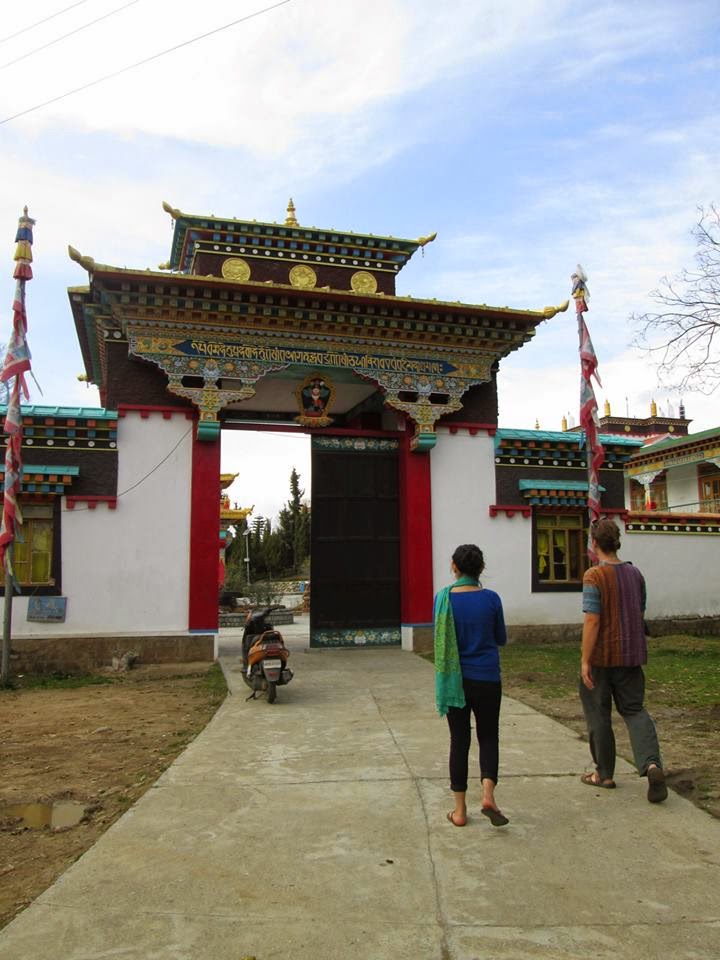 I began to feel a lack of cultural identify and an uncertainty about what to share with the group, as I was the only musician from the U.S. I then met an extraordinary person, Kam Tsz Ying Fioni who happened to share the same feelings. Fioni is from Hong Kong, and has training in Western classical music. Like me, she didn’t have much traditional folk music to share with the group. My dear friend Arsalan recommended that we collaborate and maybe present a song to group together. The first songs we came up with happened to be in complimentary keys, so we immediately began working on our AmeriKong Song which was performed, along with the tunes from the other countries, in an intimate concert for the locals on the eve of the Tibetan new year.
So many people came together to make this experience possible, more than I could possibly list all at once. There was such a genuine feeling of appreciation for one another and it truly felt like a family of artists, sound wizards, healers and helpers. I often speak of the oneness of all things, and I have seen such a great example of this in Ethno India; people gathering together to celebrate their differences and honor each other’s culture. Beautiful. I feel blessed to have had the opportunity to share this time and energy with such incredible people. 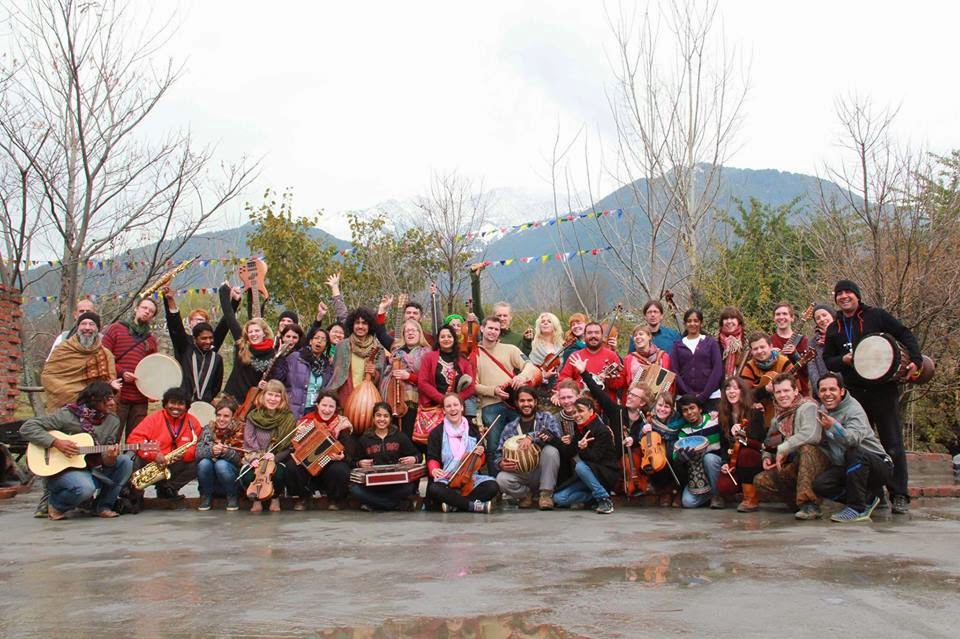 Recordings will eventually be released of the tunes, as Barry Goldberg and Phillip Horvath worked ceaselessly to capture the sound and essence of the gathering.
SO much love,

[Editor’s note: Nathan will be part of our working team hosting Chattanooga’s first World Music Weekend in May.  We hope he’ll teach us some of the music from this incredible Ethno India experience!]

Listen to this beautiful original tune by our Flemish friend Myriam DeBonte, performed here with the Transatlantic Chilean Folk Ensemble in a yarn shop in Scotland. Does that sound like a bunch of cultures all mixed up? Maybe that’s part of what makes it sound so beautiful! If you are in Chattanooga at the end of May you’ll be able to learn some tunes from Myriam, and join a discussion about how music can transcend cultural boundaries, promoting creativity, tolerance, deep listening, and genuine appreciation for the diversity of our planet.

“I took a walk down Main Street, mama, just to lose them Chattanooga blues,” sings Lon Eldridge.  It’s a 68 degree (fahrenheit) afternoon washed completely in bright warm sunshine.  From where I sit in the upper mezzanine of the Flying Squirrel bar/restaurant, I can see the mountains in the distance, and in front of them rows of commercial buildings housing all locally owned companies.  Through the glass walls I see dozens of patio diners, with either babies or dogs at every table.  Upstairs in the mezzanine we lounge on these chunky pieces of furniture that could classify as either couch or chair, or both.  The upholstery is the most mellow shade of “Chattanooga blue,” just like you’ll see painted on all four bridges across that wide ol’ Tennessee River.  Those blue bridges might be the only “blues” we get if the weather is going to be like in Chattanooga.  If you want more blues than that, your best bet is to come to the Flying Squirrel for brunch.*

I’m sitting here in this mezzanine (feels like an urban treehouse) as happy as can be, after a short walk around the grounds of the Crash Pad next door, easily imagining the whole place filled with musicians on the weekend of May 30, 31 and June 1.  That’ll be the first of at least two, and hopefully many, World Music Weekends, where people from all different backgrounds come together to share tunes and songs, dances and conversations, workshops and concerts, laughter and connection.  For that weekend we are reserving a cluster of buildings and outdoor space around the intersection of Main Street and Rossville Ave., that will become our festival grounds.  Much of the weekend is free and open access, alongside a schedule of workshops, concerts, and presentations that will all be included in the weekend pass.  I believe that today’s sunshine and musical bliss is a perfect preview of our special weekend in May/June.  Whether you’re one of the lucky few who live in Chattanooga, or planning to visit, I hope you’ll come be part of our first World Music Weekend!

Here are some ways to get involved:

– Join on as a partner or sponsor for the weekend (email christie@chattanoogafolk.com)

– If you are a musical teenager, apply for our “Teen Track” and get ready to learn a lot of music and perform together at the end of the weekend!

*Lon Eldridge and the 9th Street Stompers play for brunch here almost every Sunday.  Live music from 11am-4pm, co-organized by the Folk School of Chattanooga.  Today we heard the trio of Danimal Pinson, Jeff Joyner, and Jessica Nunn in the early shift, and now the Stompers are swingin’ it!  On June 1st at the Flying Squirrel, we’ll have performances from the participants of our World Music Weekend, and the Stompers will host the show.