The first semi-annual World Music Weekend in Chattanooga, Tennessee, features international tune learning sessions, singing circles, dancing, and a music educators forum.  There are places for 40 weekend guests at Chattanooga’s world class hostel, the Crash Pad.  This will be our retreat hub, where we can make music together at all hours of the day and night, enjoy barbeque dinners on the grounds as well as games and dancing, and visit other unique and welcoming locations around the Southside.

Who’s going to be there? …maybe you!

In addition to local teen and adult musicians, we welcome musicians from outside our city to visit Chattanooga for this weekend music retreat.  Whether your musical culture is centered around blues, bluegrass, old time, opera, hip hop, jazz, or something else, we encourage you to come with open ears and an open heart, ready to share music with the people you meet, and learn music from other cultures. 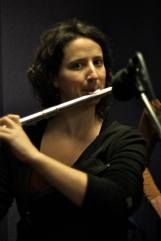 Musician and organizer Myriam De Bonte started to play flute as a child at music school. She fell in love with the diatonic accordion as a teenager and began learning double bass about a year ago. Thus she has developed a wide perspective on music arrangement and performance. She discovered a passion for world music and cultures from when she first participated at Ethno camps, about a decade ago. She got addicted to Ethno and began traveling and learning music and dances from all over the world. When she is not organizing Ethnos or music workshops, she plays in different folk and world music bands, teaches accordion and tries to recall the thousands of tunes and songs she has learned over all these years.
waarisboris.be
myspace.com/smesenoorkestar
facebook.com/chileanfolk

Leen Devyver has been dancing through life ever since she discovered folk music.  She’s been a dancing teacher for over 10 years, teaching many feet how to dance European folk dances and travelling around doing so. Her second love is the one for the cornemuse (French bagpipe) and folk music. At age 17, she finally got to buy her first instrument and learned how to play French and Belgian tunes. She also worked in a music record store, specialized in folk music, and got the opportunity to specialize into the universe of folk music. Bumping into Myriam several years ago while co-organizing a festival (another of her favorite activities), she got convinced to offer a helping hand for Ethno Flanders.  After this experience, no other musical activity could ever surpass this one and so also Leen got addicted to this way of exchanging music and culture… Welcome to the Ethno World!

He is Frank Fairfield. A musician. A banjo picker. A fiddle hummer. A song singer. We’ve heard him described as someone who was discovered at a farmers market out in California, as if he were some long lost treasure or mythical land. As we see it, it isn’t some deep yearning for a time long forgotten that drives Frank Fairfield, he isn’t trying to be something that no longer exists, because in fact, he DOES exist. The music he plays, creates, and performs is the music that carried all of us, from all over the world, to the place (wherever that place may be) we are now. He plays the American landscape, the one he himself sees and experiences. He goes about it with the only tools necessary, as any good craftsman would. Its not some ship filled with Spanish doubloons, or some ancient Amazon city of Gold, its Frank Fairfield. A musician. A banjo picker. A man not competing with time, only living in his own.

“Fairfield is worthy of your consideration, even if you’ve never heard or considered the old-time music. He plays with a rare integrity, offering up his life in a way that does exactly what folk music must do– it relates the world as the singer sees it, mixing sadness with sweetness, excitement with low-down and miserable depression. This has nothing to do with genre; hip-hop, jazz and rock all feel this way, too. Like the best of it all, Fairfield’s music seems inexorably real and entirely necessary.” – Grayson Currin, Pitchfork